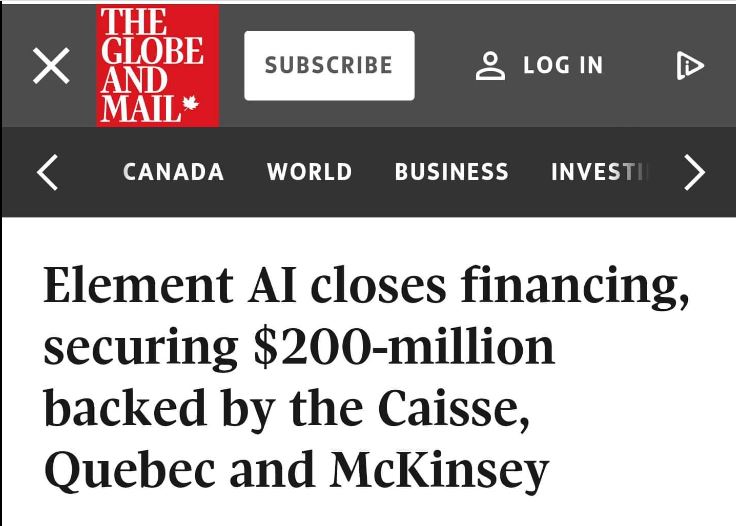 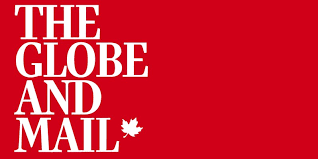 This article was published more than 1 year ago. Some information in it may no longer be current.

Artificial-intelligence startup Element AI Inc. has closed one of the largest venture-capital financing rounds by a Canadian technology company, the second time in its three-year life that it has secured more than US$100-million in outside investment.

However, unlike most startups fortunate to attract that level of capital, the latest financing is not a mark of the Montreal-based company’s commercial success. Rather, it is driven by investors – notably pension giant Caisse de dépôt et placement du Québec – intent on reversing Element’s disappointing performance to date, by bringing some much-needed discipline to its operations and shifting its strategic focus, sources familiar with the deal told The Globe and Mail. The sources were granted anonymity because they were not authorized to speak publicly about the deal.

“Operationalizing AI is currently the industry’s toughest challenge, and few companies have been successful at taking proofs-of-concept out of the lab, imbedding them strategically in their operations and delivering actual business impact,” Element’s chief executive and co-founder Jean-Francois Gagné acknowledged in a statement. He added the new investors “understand this challenge well.” The company declined an interview request.

The deal sees Element raise US$151.4-million from a group led by the Caisse, the Quebec government and global management-consulting giant McKinsey & Co., whose advanced analytics and AI division QuantumBlack opened a Montreal office nine months ago. Quebec Economy and Innovation Minister Pierre Fitzgibbon told The Globe last month the Caisse and province were putting up US$75-million and US$25-million, respectively, and provided additional information that suggested the company would be valued at up to US$625-million. McKinsey invested approximately US$15-million, said a source familiar with the deal.

The financing comes two years after Element secured US$102-million from global investors, months after its much-hyped launch by a group of Montrealers including deep learning pioneer Yoshua Bengio and Mr. Gagné.

Element has positioned itself as the champion of a flourishing AI sector in Montreal that both the provincial government and Caisse have been keen to support.

The company set out on a global search in June, 2018, to raise US$250-million to fund its development of AI-powered software intended to help bring operational improvements to a range of industries. In the end, a deal came together with the help of institutions in its own backyard after the provincial cabinet deemed the startup to be “of significant economic interest to Quebec.”

The funding comes after several setbacks for Element in getting products to market, after a torrid hiring spree that saw it grow its ranks to more than 500 people before proving there was substantial commercial interest in its offerings. The company generated less than US$10-million in revenue last year, primarily from consulting contracts. By contrast, Ottawa e-commerce software provider Shopify Inc. only reached the 500-employee mark the year it hit US$100-million in revenue.

Element’s aggressive recruitment raised the ire of other local AI companies, which complained Element was recklessly draining the market of talent. The company has shed several executives in recent months.

Mr. Fitzgibbon told The Globe last month Element had undertaken “a lot of soul searching” recently, adding, “There is some adjustment required, [and] we’ll be tightly monitoring them.” He said Element needed to focus on promising applications, adding large customers and working in a “proper partnership with the shareholders … to bring outside resources to influence the strategy.

“They need to be generating a lot of revenue and profits, which they aren’t right now,” he said. “Although this is a risky investment, it is one we as a government [believe] is worth it.”

Sources familiar with the deal said Caisse officials disagreed with the company’s expensive strategy of hiring massively before reaching commercial success. But they also believed Element could still succeed with the talent it had amassed and technology it had built by developing software to solve customer problems using AI tools in a couple of sectors with high potential, notably insurance and supply chain logistics.

The Globe also learned the Caisse, one of Canada’s largest fund managers and a heavy backer of domestic tech startups, only agreed to invest after protracted negotiations over such matters as veto and governance rights for all major investors, in part related to the company meeting certain performance targets, as is the case with other venture deals.

Its involvement was also contingent upon attracting a credible strategic investors, which the Caisse found in McKinsey.

The deal is also a high-profile test for the Caisse. The Caisse has a government-set dual mandate to support Quebec’s economic development and deliver investment returns, which at times in its history has led to ill-fated, politically charged investment decisions. In recent years, the Caisse has established itself as a leading financier of Canadian tech firms driven by a methodical approach whereby it finances top performing startups backed by Canadian venture funds it supports. Backing Element is a departure, as the Caisse effectively funds a turnaround, not a growth story.

“With this transaction, we are investing capital and expertise alongside partners who are ideally suited to transform Element AI into a company with a commercial focus that anticipates and creates AI products to address clients’ needs, » Charles Émond, the Caisse’s executive vice-president and head of Québec investments and global strategic planning, said in a release.

Editor’s note: An earlier version of this article incorrectly said the Caisse de Depot et Placement du Quebec stood to benefit more than other investors in Element AI if the company was to succeed and that it alone stood to drive Element’s corporate agenda with certain veto and governance rights obtained during financing negotiations. This version has been corrected.

Your time is valuable. Have the Top Business Headlines newsletter conveniently delivered to your inbox in the morning or evening. Sign up today.

SOURCE: THE GLOBE AND MAIL